What Is The Bone Marrow?

Where Is The Bone Marrow Located?

Yellow bone marrow is located in the medullary cavity, which is enclosed within the endosteum: the inner bone surface consisting of endothelial cells and fibroblasts.

Red bone marrow is found in the cavities of the spongy bone, and also in the outer layers of the medullary cavity, surrounding the yellow bone marrow.

What Cells Are Made In The Bone Marrow?

The red blood cells are the most numerous of all of the blood cells. They transport oxygen throughout our body. The white blood cells include monocytes and granulocytes, which mediate the inflammatory response, and lymphocytes (T cells, B cells and natural killer cells) which are the key components of our adaptive immune system. The platelets help clotting, healing and recovery when we are injured. 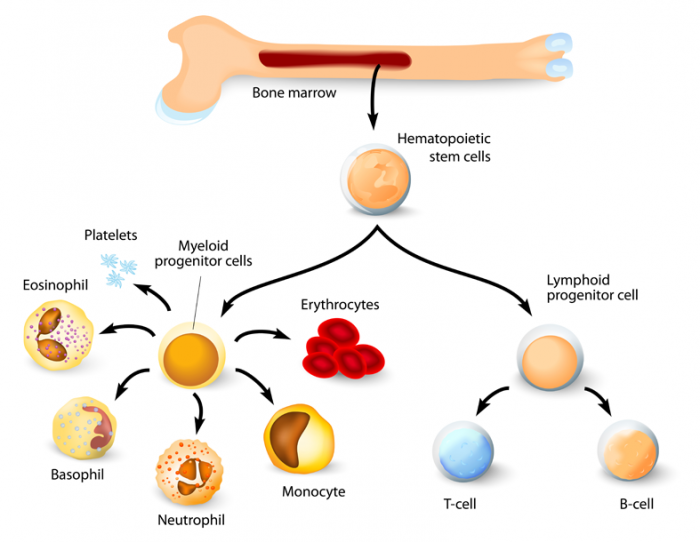 How Do Blood Cells Leave The Bone Marrow?

While we sometimes view the skeleton as a simple scaffold to support our weight, bone is still a living, growing tissue that must be supplied with nutrients by a network of blood vessels. As blood cells mature, they move towards the central region of the bone marrow, where they exit through a dense network of capillaries (small blood vessels) and enter the bloodstream.

Prior to leaving the bone marrow, red blood cells eject their DNA-containing nucleus and destroy their organelles, but still retain a residual network of ribosomal RNA (normally used for producing proteins). Cells at this stage are called reticulocytes, and circulate in the bloodstream for about a day, during which they destroy their remaining RNA and become fully mature red blood cells (erythrocytes). In healthy adults, 1 to 5 in every 200 circulating red blood cells are reticulocytes.

Monocytes usually circulate for around 3 days after exiting the bone marrow before becoming a macrophage or dendritic cell. Lymphocytes, on the other hand, must first migrate to the thymus, where they undergo rigorous “vetting” to ensure that they will not react to the body’s own antigens.

What Happens In Diseases of the Bone Marrow?

When too many red blood cells and platelets are produced, this can lead to an increased risk of blood clot formation, blocking blood vessels and causing stroke and heart attack. Overproduction of white cells can weaken the immune system when one type of immune cells is overproduced to the detriment of other types. Underproduction of red blood cells can lead to anaemia, while a lack of platelets causes increased bruising and bleeding due to defective blood clotting.

There are 2 types of bone marrow transplants: allogeneic and autologous. Both types take healthy bone marrow cells and use them to replace the patient’s diseased or damaged cells.

In an allogeneic bone marrow transplant, a healthy person’s bone marrow cells are removed and given to the patient. Most donated bone marrow comes from a sibling, but it can also come from a more distant relative or an unrelated donor.

In an autologous bone marrow transplant, some of the patient’s own healthy bone marrow cells are harvested. These cells can then be given back to the patient as a transplant after their existing bone marrow has been destroyed. This does not by itself fix genetic conditions, as any disease-causing mutation will be carried by all of the patient’s stem cells. However, thanks to gene editing technology, it is becoming possible to correct genetic mutations in harvested stem cells prior to transplantation, effectively curing the genetic disease.

All you need to know about bone marrow: https://www.medicalnewstoday.com/articles/285666

Turning back the Clock on Aging Stem Cells

The Promises and Dangers of Using Stem Cells to Combat Ageing